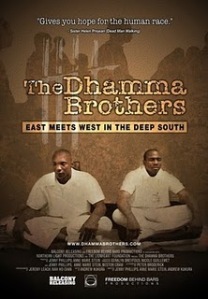 A while ago I saw a documentary called the Dhamma Brothers, where prisoners within a maximum security prison do a 10 day silent vipassana retreat. I’m personally fascinated with stories of prisoners stories practicing dharma. I think in prison, its a very violent and difficult place to cultivate love and compassion and at the same time, its an very helpful in a way because someone doesn’t have anywhere else to run and has to eventually work on their mind.

I particularily like stories of prisoners doing non-sectarian meditation techniques like vipassana and learning about their experience. It allows non-buddhists to try out buddhist meditation techniques. Here’s some stuff from the Dhamma Brothers website with info about the documentary and the trailer.

To create a national conversation and a call to action about the need for effective prison treatment programs through a national public television broadcast, widespread theatrical, grassroots and educational screenings, and distribution to prisons of The Dhamma Brothers documentary film. Both film and companion book, Letters From the Dhamma Brothers, open hearts and minds to the possibility that prisons can become places for effective rehabilitation, ensuring safer prisons and safer streets.

An overcrowded, violent maximum-security prison, the end of the line in Alabama’s prison system, is dramatically changed by the influence of an ancient meditation program. Behind high security towers and a double row of barbed wire and electrical fence live over 1,500 prisoners, many of whom will never again know life in the outside world. But for some of these men, a spark is ignited when it becomes the first maximum-security prison in North America to hold an extended Vipassana retreat, an emotionally and physically demanding program of silent meditation lasting ten days and requiring 100 hours of meditation.

The Dhamma Brothers tells a dramatic tale of human potential and transformation as it closely follows and documents the stories of the prison inmates at Donaldson Correctional Facility as they enter into this arduous and intensive program. This film has the power to dismantle stereotypes about men behind prison bars.

“For the first time, I could observe my pain and grief. I felt a tear fall. Then something broke, and I couldn’t stop sobbing.
I found myself in a terrain where I had always wanted to be, but never had a map. I found myself in the inner landscape, and now I had some direction.”
– Omar Rahman, Dhamma Brother

4 thoughts on “The Dhamma Brothers”