The Maitreya Project is aimed at building a 500 foot statue of Maitreya Buddha in Kushnigar India, the place where the Buddha had died. The statue will contain holy relics of the Buddha and different Buddhist masters, and is aimed at helping the impoverished area. The statue is planned to last 1000 years.

Benefits of the Project

Having a 500 foot statue of Maitreya is meant to be a symbol of peace to the rest of the world. While are so many large buildings made around the world that are dedicated to commerce and showcasing engineering and architectural skills, there are not enough symbols that point people towards inner peace.

Receiving of Land and Supporting 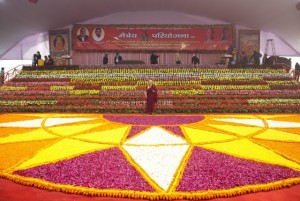 The stage for the land giving ceremony

As of December 13, 2013, land has been handed over from the local government to the project. A large ceremony has taken place to commemorate this monumental activity, and the project is moving forward. To learn more about the latest activity with the project, click here.

1 thought on “Laying Foundation for the Maitreya Project”