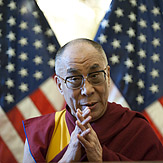 While many people in both the United States and across the world are visibly upset about the political activity in the United States, His Holiness the Dalai Lama gives advice on how to get through this period.

The “president, of course, (is a) very important individual, but basically I (am) always telling (people), the world belongs to humanity,” said the Dalai Lama during the Emory-Tibet symposium of Scholars and Scientists held at the Drepung Monastic University in India in December. “Each nation belongs to the people,” he said.