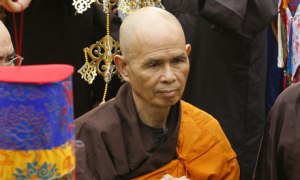 Zen master Thich Nhat Hanh, one of the world’s leading spiritual teachers, is a man at great peace even as he predicts the possible collapse of civilisation within 100 years as a result of runaway climate change.

The 86-year-old Vietnamese monk, who has hundreds of thousands of followers around the world, believes the reason most people are not responding to the threat of global warming, despite overwhelming scientific evidence, is that they are unable to save themselves from their own personal suffering, never mind worry about the plight of Mother Earth.

Thay, as he is known, says it is possible to be at peace if you pierce through our false reality, which is based on the idea of life and death, to touch the ultimate dimension in Buddhist thinking, in which energy cannot be created or destroyed.

By recognising the inter-connectedness of all life, we can move beyond the idea that we are separate selves and expand our compassion and love in such a way that we take action to protect the Earth.

To read more about this compelling argument, click here.